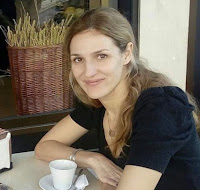 Ioanna Tzartzani is a Greek sociologist, dance scholar and educator currently lecturing at the Theatre Studies Department of the University of the Peloponnese and is a member of the Theatre en Corps Collectif. She holds an MA Degree and a PhD in Dance Studies from the University of Surrey, U.K. (2002, 2007), a BA (Hons) in Sociology from the Athens Panteion University of Social and Political Sciences (2000) and a Degree in Dance and Dance Teaching from the Greek Ministry of Culture (Despoina Gregoriadou Higher Dance School, 1999).  Ioanna has been researching, discoursing and teaching about dance and somatic practices, history, critical theory and cultural studies, with a long term interest in the micro and macro politics woven within –and emerging from- the performance of identity(ies).

Her relation to the project 1[-1] Materiality of Exile, lays on the shared interest in unheard voices/unseen bodies, hi(stories) of displacement, migration and exile, bodily discourses and evolving methodologies and the constant (re)negotiation of boundaries and identities: geopolitical, artistic, social,  inter- personal, intellectual, somatic and more. Following both Ana Sanchez Colberg’s daily postings, as well as the 11 collaborating artists’ ‘responses’ and actions, Ioanna will attempt to track the various threads of the project drawing parallels, tracing emerging discourses and perhaps opening up new ones, in a series of 11 postings unevenly spread within the one-month duration of the work.

As I anticipated Day 1 – the kick-start of this exhilarating, challenging,  intricate yet unruly project- I found myself anxious about my positioning as the ‘one-(sur?)plus’ person:  the twelfth woman ‘breaking’  the rule of the 11. The ‘outside’ witness, who can still never keep an ‘objective eye’ (what would that be?) her own agenda(s) creeping in at all times: resurfacing and/or (re)emerging some deeply rooted, conveniently congealed and self-assuring, some misty and obscure, almost impossible to trace. All to be inevitably revisited and challenged –some even before the project’s official ‘launch’.  Would I manage to comply with the rule of 11? To keep track of all 11 posts daily (or twice a day)? To upload my response at the 11th hour of each day, not disrupting the one single original condition, which we all agreed upon?

‘Rules are to be approached with humor’ Ana reminded me. In Life too. Of course… how do we enter a discourse on subversive narratives, voices and bodies in the move? How do we re-inhabit and re-activate spaces of exile? Those in-between ‘empty’ spaces cluttered with (his)stories. How do we address conformity, repression, confinement and expulsion by not re-visiting the rules?

Ana’s first posting went off-track, as the circumstances of her relocation (from the familiar to the unknown) disrupted the initial design of the daily routine of keeping up with her rule of 11. And that is fine. It is actually more than fine. It is a reminder of the inherent vulnerability and the precarity -as Judith Butler would put it-  of ANY process of re-(and even more dis-) location and exile; even when voluntarily and thoroughly planned from an advantageous position of privilege: the privilege to move/travel at will, voice, perform, materialize and render visible one’s very presence.

While exchanging stories, thoughts and practices with 11 + 11 women, weaving a (her/their) plot of oral, sensory, bodily, theoretical and personal accounts and emerging discourses, Ana writes:
…In the kitchen, on the train, in the corridors of schools and hospitals, sitting up with a pizza or a drink, women are usually the ones who tell life-stories, cornered in weaving rooms, like Penelope, they have since ancient times, woven plots with the thread of storytelling.  They have woven stories, letting them casually tear the metaphor of the textum of professional men of letters...".

Female narrative has repeatedly operated as subterranean, non-linear, corrosive, and challenging to authoritarian voices, texts and practices. Within (male dominated) hegemonic narratives on Mankind, History and Civilization, female narration has conventionally been classified as ‘emotional’, ‘non-objective’, ‘volatile’ and ‘unreliable’. A nebulous network of whispered stories, to be shared behind closed doors in the private sphere of the domestic realm, assembled by and addressed to women. When acknowledged and/or evaluated within official (Hi)story/ies these female accounts may be welcomed as supportive/supplementary to the Grand narratives (i.e. on Home/Family, Nation/Country, Religion/Culture etc), or deemed undesirable and/or threatening, when found to be disturbing to the established order of things. In any case, female narrative has long been ranked lower to male derived ones, subject to (their) praise or scorn.

Whether practised daily through chosen and/or enforced chores and tasks –much like Penelope’s weaving- carefully articulated, loudly broad-casted or intricately performed, these (hi)stories have proven to be particularly resilient. Through narration a sense of selfhood is shaped, authorized and acted out. Exemplified and embodied in Ana’s work, this inextricable link between narration and self-identification (from Edward Said to Hannah Arendt and Adriana Cavarero), leads to issues of sex, class, race and age ultimately begging the question of power: Who holds the power to narrate? Who holds the power to (re)shape the stories of (and for) the self and the other? Who is exiled from that space of power?

Discussing Kristeva within her work, Ana notes: “The language of exile muffles a cry, it doesn't ever shout”. The muffled voice of the exiled –from one’s ‘home’, from one’s own narration of the self- becomes a shout when the story is told, retold and multiplied. In her reading of Cavarero (2005, p. 61), Ana further sites:  “the telling of the story’ becomes political where it can unfold in a scene where uniqueness constitutes itself ‘in relation’ and in which the feminine custom of ‘self-narration’ finds a ‘political scene’, shared and interactive”.

In this highly interactive project, where female voices, bodies and acts become progressively engaged in an accumulative dialogue, Ana’s attentiveness to the specific details of each story and her respect for their uniqueness allows for their relatability rendering the project highly personal, open and political.  11+ 11 and 1+1 ‘narratable self(s)’ are unfolding in multiple platforms, moving freely from one to another, engaging in personal accounts, cross-referencing and subplots, opening up a number of discourses on the materiality of exile and the infinite possibilities of female creation, narration and communality.